Last updated: June 8, 2019 – Gambling news has been slow in the Land of Enchantment state. The massive Tesuque Casino in Santa Fe is the newest tribal casino in the state but it does not spread any actual poker games. 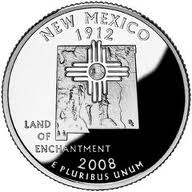 New Mexico offers several different forms of legal gambling, but they are pretty strict on their laws when it comes to illegal forms of gambling. If you play by the rules you will have no issues once so ever, but if you don’t you could find yourself in hot water.

“Gambling consists of; making a bet, entering or remaining in a gambling place with intent to make a bet, to participate in a lottery or to play a gambling device, conducting a lottery, or possessing facilities with intent to conduct a lottery.”

“A bargain in which the parties agree that, dependent upon chance, even though accompanied by some skill, one stands to win or lose anything of value specified in the agreement.”

This question comes up often, not only in New Mexico but for all states within the United States, and is a controversial one to answer. There is nothing in their state law that specifically states it is illegal to play poker over the internet for real money, and there are no cases to be found where someone was arrested for doing so. This can make one assume it is fine to play online poker in New Mexico, although it’s never best to just assume.

Where Else Can I Play Poker in New Mexico Legally?

Many people play poker at Indian casinos in New Mexico, which is completely legal to do so. They currently have 20 Indian casinos run by 14 tribes. ThePokerAtlas.com is a great resource for finding all the daily poker tournaments offered at all the casinos within the state.

The state allows five main types of legal gambling which are:

Pari-Mutuel Wagering – Horse Racing is regulated by, §60-1A-1 thru §60-1A-30 NMSA 1978, of the New Mexico Statutes.  Horse racing requires a state license which allows for betting on live races to be legal. Pari-mutuel wagering can be done only on the licensed premises where a live horse race is conducted, or where a simulcast horse race is televised or projected on the racing grounds of the licensed premises of a racetrack licensee. Slot machines can legally be operated at a licensed track as long as they have the additional license to do so.

Indian Casinos – New Mexico is home to 22 Native American Tribes, although only 14 of the tribes run a casino. As mentioned above, there are a total of 20 Indian casinos which is much more than what most states offer. Follow this link to learn the historical timeline of Indian casinos in New Mexico.

In mid October 2014, New Mexico Governor Susana Martinez’s and a federal judge in Albuquerque stopped the Interior Department from approving a new gambling compact for the Pojoaque Pueblo tribe. If the compact would have not been denied, the tribe would have stopped its revenue sharing with the state.

Charitable Gaming – The Bingo and Raffle Act identifies certain “qualified” or “charitable” organizations to obtain licenses from the New Mexico Gaming Control Board to conduct regularly scheduled bingo games and/or to sell pull tabs and raffle tickets. The money raised must go to a “lawful purpose”.

Examples of Illegal Forms of Gambling in New Mexico
Below are a few examples of prohibited forms of gambling: