It’s been said that online poker is unsafe, and while there is a reason that people have this perception, it’s not true in most cases. Online poker is not dangerous and there are plenty of trustworthy sites to choose from.

There are definitely sites that should be avoided and that is why some sites, like this one, take the time to research and recommend the safest sites for players in the US. Our experience in and knowledge of the industry is what sets us apart from other “online poker review” sites. We won’t steer you in the wrong direction.

The perception of poker online as unsafe comes from a confusing history of US laws, created by legislators who usually did not have a complete grasp of poker as a skill game or the technology that can be used to make games online safe.

Nevada was the first state in America to officially legalize online poker. It was done to enable players within the physical borders of Nevada to play at sites that were licensed by the state, and geolocation technology was used to verify the location of those players. If they tried to access the site from outside the borders, they could only sign up for a site but not play real-money poker online. Once their IP address showed up inside Nevada, they were allowed to play. It worked, and there were no reports of people outside of Nevada playing on the sites. Delaware did the same thing, as did New Jersey. The latter did it on a more massive scale, with numerous different online poker and casino sites licensed for players only in New Jersey, and its geolocation technology worked, too. Pennsylvania joined the party in 2019. Michigan and West Virginia also passed online poker legislation in 2019.

In addition, the states with legal online poker also have regulations in place requiring the licensed sites to keep player funds separate from operating monies, meaning player funds are always safe, even if an operator faces mismanagement or fraud. Many online poker sites – even ones offshore, like the ones we recommend here – do the same, but the US regulated market makes it a requirement. This is yet another example of how regulation protects consumers.

The safest way to protect the millions of Americans who want to play online poker is for the US government to pass a federal law that would regulate all sites that offer online poker.

Until that happens, the options for US players are limited. The four states with legal US poker have more options for their players, but there are several offshore sites that are safe for American players. Their many years of experience have shown them to be trustworthy, and they do maintain industry standards set by the regulators that issue their licenses, though they are currently outside of the US. We list the top recommendations for you here.

1. IgnitionPoker.eu (previously known as Bovada/Bodog) –Ignition Casino/Poker is operated by Morris Mohawk Gaming Group, which essentially was built by Bodog. The company was owned by a large Canadian bookie, but it was sold to a larger operation – Morris Mohawk Gaming Group, which is based on the Kahnawake reservation in Quebec, Canada. While Bodog became a part of the Pai Wang Luo Poker Network, Ignition did as well, which means Ignition players pool with Bodog/Bovada players to create a larger player pool with more games and tournaments. The names involved here have been synonymous with reliability and safety, as players have never been defrauded, cheated, or scammed from any sites on this network. We have every confidence that this site will remain focused on serving its customers honorably. Withdraws are usually the fastest in the industry taking 2-10 days depending on the method, and there are several methods by which to deposit funds. Ignition’s customer service is also easy to deal with and very helpful. 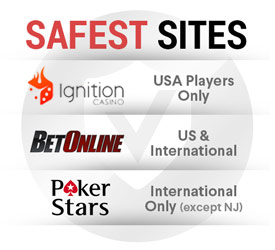 2. Betonline.ag –Since BetOnline operates out of Panama they can legally accept players from almost every state in the United States, unlike Ignition Poker. Because of ambiguous US laws, the owner has remained anonymous so far, but the site has a long history of paying players on time and offering games that are free of bots and cheaters. It is one of the most trusted US poker sites on the internet today, and it continues to become more popular as players discover its soft games and ever-growing available poker options. The site also caters to a variety of players and offers multiple deposit and withdrawal options, with some like Bitcoin being the fastest and others like eChecks taking up to two weeks. It is a great alternative to Bovada.

3. PokerStars.com – PokerStars has long been known as the most trusted (and largest) online poker site in the world. While it was ousted from the US market on Black Friday in April 2011, it made reparations and peace with the US government since that time. Not long after the New Jersey poker market opened up, PokerStars underwent a thorough investigation by the NJ Division of Gaming Enforcement and obtained a license there. It has also applied for a license in Pennsylvania. PokerStars is making its slow but certain comeback to the US market, which is great for players because of its stellar reputation for safety and security. The site is even more careful than ever before because it wants to obtain entry into many more regulated markets, so PokerStars adheres to the letter of every law. For players who can access PokerStars, it is highly recommended. For those yet unable to play on PokerStars, be patient, as it will be an option when the US market opens up even further.

There are several online poker networks and sites that have gone out of business, but any sites claiming any type of association with them should be avoided at all costs. Lock Poker was on the Revolution Gaming Network, and while they seem to have disappeared (with all of the players’ money), any sign of them returning should send players running in the other direction. Full Flush Poker was another that shut down in 2016. It was part of the Equity Poker Network, another name that should be avoided.

Any sites on the Merge Gaming Network are not recommended. Carbon Poker is the most popular of the three major poker sites connected to Merge, but Players Only and Sportsbook.ag are also on the network. Not only have the sites increased their fees for transactions in the past year, payout times have increased to anywhere from two weeks to several months, with some players complaining that they have been refused payments. In addition, Carbon Poker has been shown to ban winning players. Finally, there are not even any bonus incentives to bring new players to the sites. Most players have left these sites or are in the process of doing so.

If there are sites that you find appealing but don’t see them recommended here, feel free to contact us for information. Another place to look for information is the popular online poker forums, where players tend to take their complaints about sites and post their bad experiences.

Safety and security are absolutely paramount when it comes to picking an online poker site.

Online poker players prefer to play real-money poker, which means trusting these sites with your hard-earned cash. Players don’t want to risk that for a fly-by-night operation. Generally poker players are depositing using credit cards or wire transfers so it’s extra important to make sure you trust the operator where you’re sending your money.

Fortunately online security has vastly improved since the early days of the 2000s when the online gambling industry was still in its infancy. These days online poker sites are forced to segregate player funds away from their operating income so that your deposits are always held safely.

There are also plenty of options for online poker players in the USA these days as sports betting and online casino sites have been flourishing. The Poker Alliance is also fighting to legalize online poker in more of the USA. The important thing to remember for most of these sites is that it’s in their best interest to keep their players happy. That’s why you don’t see shady sites operating for long. They sacrifice any chance at long-term success for a short-term gain.

You want your deposit to be handled with care but you also want the software to reliable. These days poker sites pride themselves on having certified random number generators (RNGs), which are able to replicate the exact odds of a 52-card deck of cards just like real-life poker.

Are US Poker Sites Safe to Play at?

If you’re talking about sites licensed in American states? Absolutely. Those sites include PokerStars, 888poker, PartyPoker, Pala Poker, and WSOP run by Caesars.

If you’re referring to offshore sites, it depends. The ones we recommended above and in other places on our site are not only safe, but licensed, experienced, and proven to be trustworthy. The two that have always been at the top of our list are Ignition Poker and BetOnline.ag.

Of course safety should be the bare minimum for picking an online poker sites. There are plenty of other factors to consider when deciding on where to play online poker including the software, player pool, sign-up bonuses, available poker games and even the level of skill on the site. Fortunately we take all those factors into consideration in our comprehensive poker site reviews section where we take a look at all the major operators in the USA>

Never Mind the WSOP, What About the Daily Deepstacks?

88 Bracelet Events on the 2021 WSOP Schedule

Who Are The Five Biggest MTT Winners From Mississippi?