What is Freeroll Poker?

As the name implies, freerolls are free to play. That’s what makes them the best way for new players to learn poker, get a feel for the game and start building a bankroll of their own. While the tournaments are free to enter, they offer small cash prizes for the top finishers. This makes it possible to start building millions for free. Luckily, nearly all the best online poker sites off some kind of freeroll.

A lot of players have gotten their start playing on free poker sites and a few pros have even tried to challenge themselves by building up a bankroll from nothing. The path is there, it can be done, it just takes time, dedication and practice. Since they’re free to enter, you aren’t limited by your bankroll, only by the number of tournaments and time you want to put into improving your poker skills. Once you’ve mastered your skills in the free game and have built up a small bankroll, then you can jump to the more lucrative cash games with tons of experience under your belt.

There are all different kinds of freerolls too. You can play in tournaments or ring games. They’re also offered across the spectrum of poker games. You can play freeroll Texas No-Limit Hold’em or a number of other poker variants like Omaha, Seven-Card Stud or Razz.

Pros who Started out Playing Freerolls

Annette Obrestad famously won the 2007 World Series of Poker Europe a day before her 19th birthday for £1 million and has won millions of dollars in tournament poker since. But before she got to that WSOP final table, Obrestead, from Norway, had built up a ton of experience playing freerolls. Obrestad started playing poker as a teenager, when she wasn’t even old enough to deposit money on a poker site. That’s why she started playing freerolls and slowly started building experience and a bankroll.

Eventually, Obrestad kept moving up the stakes and making more money. Obrestad is said to have cashed out nearly $500,000 on PokerStars and hundreds of thousands of dollars on other sites. When she finally did deposit, there’s no doubt that a few poker bonuses helped push her bankroll up a bit. 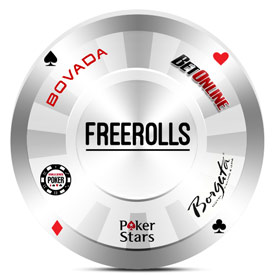 Chris “Jesus” Ferguson, a co-founder of Full Tilt Poker and the 2000 World Series of Poker Main Event Champion, is a bit too old to have started out with freerolls, but he did show that it’s possible to build a roll from nothing.

In 2006, Ferguson took on a challenge to build a $10,000 bankroll from scratch. He started out by playing freerolls and it took him a few weeks to build up his first $2. After that, Ferguson built it up to $22 and started playing micro-stakes cash games and $1 tournaments. Little by little, Ferguson kept building and completed the challenge a year later in 2007.

US Poker Sites with Great Freerolls

Freerolls are a bit tougher to find in 2021, but all the major sites still offer some kind of freeroll. PokerStars still hosts several freerolls throughout the day. Some sites in New Jersey and Nevada have freerolls peppered throughout their schedules. Lots of offshore sites have stopped offering them since demand was so high it would sometimes crash their servers.

BetOnline stopped offering freerolls in 2018, but they do have deposit bonuses for new players. If you sign up for an account there, you qualify for the New Player Freeroll bonus that offers up to $10,000 in prizes. The tournament runs on the second Sunday of each month and new players are given a free ticket to enter. The site also offers a Happy Hour Freeroll every Monday, but those winnings can only be used on the site’s live casino.

Ignition Poker offers a weekly $2,500 freeroll tournament every Thursday for certain players. To qualify, you have to have Chrome Status on their rewards program.

These are just some of the bonuses and freerolls out there. There are plenty of other sites that offer more if you start looking around. You can use any of these promotions to jumpstart your poker career with a minimal investment. You can start building your way towards your poker goals today.

If you’re in New Jersey or Pennsylvania, PokerStars is a great option to get started with freerolls. They’re almost always available, just log on and check the lobby for tournaments in brown lettering.

Players in New Jersey and Nevada can also find freerolls on the WSOP site. They have a daily $100 freeroll bonus with a maximum capacity of 600 players. So be sure to sign up early. If you’re a member of the US Armed Forces, a police department or fire department, you can also qualify in the site’s monthly Hero Freeroll bonus.

If these don’t suit you, then there are plenty of alternative online poker options out there.

US Poker Sites with the “Best Value” Freerolls

If you’re in New Jersey, Pennsylvania or outside the US, PokerStars has the best freerolls. After that, BetOnline and Ignition Poker have some pretty solid offerings.

If you agree, disagree, or just want to chime in, then make your voice heard with an online poker site review.

These sites want to keep their customers and your reviews can help them gauge what they’re doing well (like freerolls) and what they can do better (like more freerolls). You can also contact customer service or go on social media to let these rooms know how you feel.

Never Mind the WSOP, What About the Daily Deepstacks?

88 Bracelet Events on the 2021 WSOP Schedule

Who Are The Five Biggest MTT Winners From Mississippi?