When you first start playing poker it’s important that you are quickly able to recall hand rankings and the strength of the hand you’ve been dealt. Fortunately, it’s pretty easy to do so, as highlighted in this complete guide to the 10 strongest poker hands, with their rankings listed in order from highest to lowest. Furthermore, the rankings are standard for all the most popular types of poker games including No-Limit Hold’em, Pot-Limit Omaha and Seven-Card Stud. 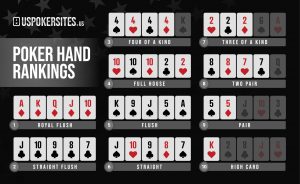 A ‘Royal Flush’, otherwise known as a ‘Royal Straight Flush’ or ‘A Royal’, is the best possible hand in poker. It consists of ace, king, queen, jack and ten, with all five cards of the same suit, such as As-Ks-Qs-Js-10s.

This unbeatable hand is rare, though, with the odds of making a royal flush just 1 in 30,939 or 0.0032 percent using 7 cards. These odds apply to the game of Texas Hold’em where you build your hand using 5 cards, but still have 7 cards to choose from, namely 2 pocket cards and 5 on the board.

A ‘Straight Flush’ consists of five cards in a row that are all in the same suit. It essentially combines a straight with a flush, with an example being Jc-10c-9c-8c-7c. This powerful hand rarely gets beaten, but in the eventuality of a showdown between straight flushes the player with the highest top card wins. Bear in mind that suits are irrelevant in poker and that only kickers are used to separate same ranked hands.

A Four of a Kind, otherwise known as ‘Quads’, consists of any four of the same value cards in each of the four suits. For example Ks-Kh-Kc-Kd-2s is a four of a kind hand. In Texas Hold’em, if the community cards dealt complete four of a kind on the board, such as 10c-10s-10h-10d-7c, the player with the highest hole card wins. In the example provided, however, if none of the players have a card higher than a 7 the hand is drawn.

A ‘Full House’ is any three of a kind hand combined with a pair. An example of such a hand would be Ah-Ac-Ad-Kc-Kd, or “aces full of kings,” which is the best possible full house hand and would in turn beat a lesser-ranked full house, as well as a flush, a straight, or any other hand ranked lower on this list.

A ‘Flush’ is fifth highest on the poker hand rankings list, and consists of five cards of the same suit, but not in consecutive order. An example would be Ac-Jc-9c-7c-5c or Qd-10d-7d-5d-2d. Between two flushes, the one with the highest-ranked card wins the hand, with an ace-high flush the best possible flush. Therefore, an ace-high flush beats a king-high flush, a king-high flush beats a queen-high flush, and so on. This is a hand that even a super tight poker player would play.

A ‘Straight’ consists of five consecutive cards in numerical order, but not of the same suit. In this hand, aces can count both as a high or low card. For example, the lowest possible straight, also known as the ‘Wheel’ or ‘Bicycle’, is five-high as in 5h-4d-3s-2c-Ad, while the highest referred to as ‘Broadway’ is ace-high as in Ad-Ks-Qh-Jc-10s.

A ‘Three of a Kind’ hand consists of any three cards of the same face value, and two non-paired cards. An example would be Ah-As-Ad, with a King and a Queen as side cards, which is also the best possible three of a kind hand. The term ‘Set’ and ‘Trips’ both refer to types of three-of-a-kind hands, but in a set you must hold a pair in your hand. By contrast, trips are when there is a pair on the board and you hold a third matching card in your starting hand, such as a 6c-6s-Kh-10h-5d board and you hold a 6d in your hand.

A ‘One Pair’ hand means you have two cards of the same face value and three other non-matching cards. For example Ac-Ad-Qc-9d-3h or 10d-10h-7c-5d-2h. In a pair versus pair situation, like the previous example, the higher pair always wins, with two aces the best possible one-pair hand. Where two players have the same pair the player with the next highest card wins.

When a player has five unpaired cards the highest-ranked card plays. The highest possible high card in poker is an ace, which would beat a king high hand, and so on. For example, an Ac-Qh-10d-7s-3h hand would beat a Kd-Jc-9h-7c-5s hand.

All the most popular “high-card” poker games use the standard poker hand rankings based on five cards only and listed in order from highest to lowest. These include Hold’em, Omaha, Seven-Card Stud, and Five Card Draw. On the other hand, “low-card” games, known as Lowball, use an alternate low hand ranking in which the lowest possible hand wins. Badugi, 2-7 Triple Draw, and Razz are examples of such Lowball games.

When playing Texas Hold’em, it’s important to remember that the best five card hand takes the pot. If you and your opponent have the same hand, however, then the highest kicker comes into play. For instance, if your holding is A-9 versus K-10 for your opponent and the board comes Q-Q-Q-Q-8, then your quads and ace high hand would beat your opponent’s quads and king high hand. If, however, the highest kicker is a community card, it’s a split pot. An example of this would be if you had 10-9 versus your opponent’s 10-7 on a 10-K-K-A-Q board, as you both have two pair each, tens and kings, with a communal ace high card.

A ‘draw’ or ‘drawing hand’ in poker is when a player’s hand is incomplete and needs an additional card or cards in order to become valuable. There are many types of draws associated with the game of poker, such as flush draws, straight draws, open-ended straight draws, and inside straight draw, to name but a few. A flush draw, for example, is a hand with four matching suited cards that needs another card of the same suit to improve to a flush. Similarly, a straight draw is where a player needs to hit one card of a certain rank in order to complete a straight.

It can be difficult to rank the best starting hands in Hold’em because you’re always going to have hands where pocket aces get cracked. In general, however, the following 10 hands are considered the best versus any two random cards: