The Best Time to Play Poker Online in 2022

The simple answer is: whenever you have time.

But if you have some flexibility and can choose some times, then we have some advice. Poker is such a rich and complex game based around incomplete information. The more information you have, the better you do. This doesn’t just apply to when you’re sitting down and playing cards. You should use this principle when it comes to every aspect of your game.

This is what really sets apart amateur players from serious ones. One of these aspects is game selection. While it’s fun to just sit down at the closest game available, advanced players pick games that maximize their winnings. When it comes to online poker, part of this is done by choosing the right time to play.

Based on data, the best time to play poker is 4pm to 12am. Weekends and holidays are prime and where you’ll find the most recreational players online, giving players their best chances.

Weekend Nights are the Time to Play 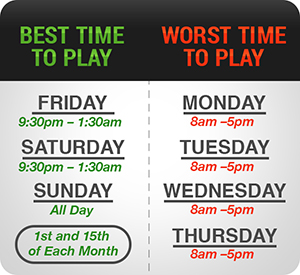 When it comes to weekends, Friday and Saturday night tend to have the weakest players. That’s when the bulk of amateur players hop online to try their hand on online poker. Sundays are a mix. Most sites host all their big tournaments on Sunday. This can be a double-edged sword because it brings out all the top pros, but it also brings out tons of recreational players.

The type of tournament will dictate the level of players. Higher buy-in and bigger guarantees bring in better players. Weekdays tend to bring out the pros too. Since it’s their full-time job, they’ll be working at all times of the day.

When poker sites are running promotions, many recreational players and jackpot hunters are around. The action around this is usually soft, so your chances are better.

The goal is to play when there’s a lot of traffic. A neat site to check that out is PokerScout.com. This site measures the traffic from all the top sites. Give it a peek and see what times are best for your site.

Lastly, don’t forget to rest. Playing is fun, but it’s healthy mentally, physically and financially to take a break every little while.

Not as International as it Used to be

Poker isn’t an isolated sport anymore. Before, you only used to be able to play in casinos in Las Vegas or find access to underground games. Now it’s an international phenomenon. Not only is it ubiquitous around the world, but all those players can play against each other thanks to the internet.

This boom really started after the 2002 World Series of Poker when Chris Moneymaker won the WSOP Main Event. That golden area slowed down after 2006 when the UIGEA pushed a few sites out of the United States. Other sites stayed, but it was harder for players to deposit and withdraw.

But during this time, there was a large global player pool with players from all around the world. This meant there were different peak times to play. Games were good during European weekend nights, which meant weekend afternoons in the United States. When games picked up in Australia and Asia weekend nights, it was early morning on the East Coast.

Players also scouted out sites that were popular on different continents and adjust their playtimes to match those peak times. Those days are over though, but some same principles apply.

Other Factors to Consider

The time you choose to play should also be considered alongside the following, as it could shape the outcome for better or worse:

But the Same Principles Apply

The United States has multiple time zones and weekend nights start at slightly different times depending on where players are. If you’re playing on a site that’s state-specific like in New Jersey, Nevada or Pennsylvania, then you’re in that time zone all the time so you know when it is best. Check out some sites that accept players from all over the United States we suggest like Americas Cardroom or Ignition poker review.