USPokerSites.us is your one-stop shop for all matters poker-related. Our poker guides are compiled by industry experts and are designed to give your poker career the best start possible. Learn how to play No-Limit Hold’em, discover the best Hold’em starting hands, read tips on how to build a poker bankroll and much more. You never know: you could be making tons of money on poker online in no time!

In addition, here are a few links to get your poker education started: 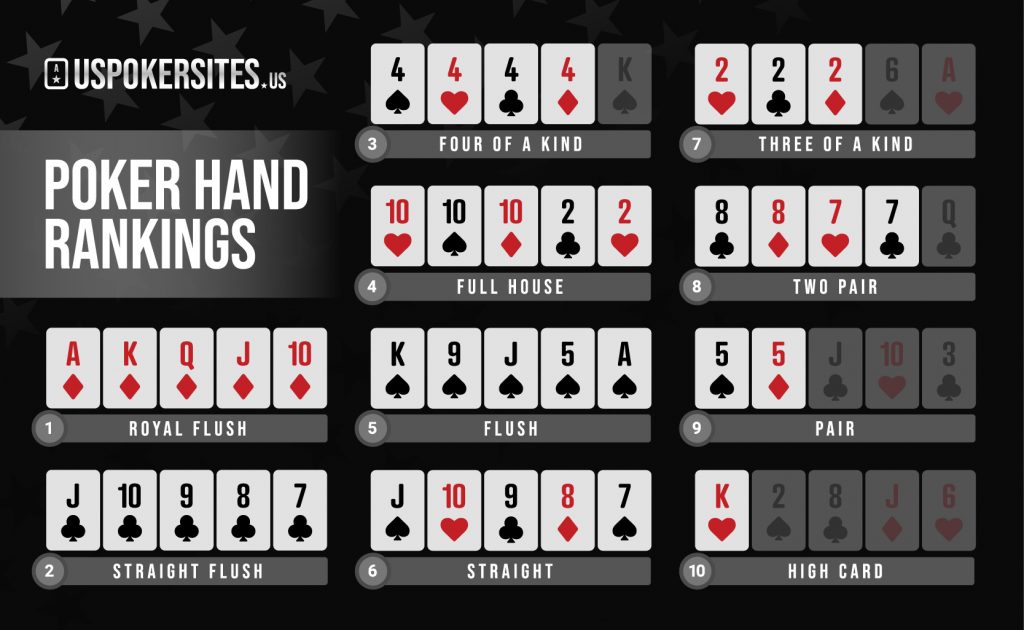 Poker hand rankings for games such as No-Limit Hold’em, Pot-Limit Omaha and Seven-Card Stud are the exact same, so learning them is one of the first things you should do before you embark on a poker career.

In Hold’em, Omaha and Stud games, aces are high although they can also be used as the lowest card in a straight, meaning the lowest possible straight in these games is A-2-3-4-5.

The weakest holding, and the one least likely to win you a pot is high card, where you do not have a pair and the highest ranking card in your hand plays. A Royal Flush, that is an ace-high straight made with cards of the same suit, is the most powerful poker hand and is unbeatable.

Here’s a look at every hand in poker:

How to Play No-Limit Hold’em

Poker legend Mike Sexton once famously said of No-Limit Hold’em that “it takes five minutes to learn but a lifetime to master” and the Poker Hall of Famer was 100 percent correct. Learning the basics of No-Limit Hold’em are easy to commit to memory, which is why the game is so popular, but becoming an expert in the game takes time and dedication.

No-Limit Hold’em starts with one player paying the small blind and the player to their immediate left paying the big blind. Those are forced bets, so they have no choice but to put them in the middle. Everyone is dealt two cards face down and the first round of betting commences.

The person the left of the big blind is the first to act, and they can choose to call the big blind, fold, or raise any amount they wish. The action moves in a clockwise direction. If there are at least two players remaining after the first round of betting the dealer puts three community cards onto the table face up, known as the flop.

The final round of betting takes place. If only one player remains after this round of betting, i.e. everyone else folds, they win the hand. If at least two players remain, these players reveal their hole cards and the player with the strongest poker hand wins the pot.

There are 1,326 possible combinations of starting hand in Hold’em, although these can be reduced to 169 if you discount hands that are the same strength: ace-jack of spades is the same as ace-jack of hearts.

The strongest possible starting hand in Hold’em is a pair of aces. You will be dealt pocket aces, on average, once in every 221 hands and will be a four-to-one favorite over any other starting hand.

There are three main types of poker games online and all have their own positives and negatives when it comes to new players. These poker variants are:

Cash games are available in a wide range of stakes, including being able to buy in for a couple of dollars, making them great for new players. Most cash games see players sit down with 100 big blinds in their stacks giving you the chance to play deep stacked poker, the best way to improve your skills. Another positive is you can leave a cash game whenever you like and if you lose your stack you can just buy more chips and continue playing.

It is easier to make money consistently in cash games than other poker variants, once you become skilful at Hold’em. There’s a saying that “cash is king” and many poker players grind cash games to make a living from poker.

MTTs give you the chance to turn a small investment into a huge score, which is the biggest draw to these games. MTTs shuffle up and deal at set times during the day and can see hundreds or even thousands of players compete. Unlike cash games, you buy into an MTT for a set amount and receive the same number of chips as everyone else. Once you lose all your chips, your tournament is over (unless it is a special tournament where you can re-enter or rebuy).

Typically, between 10-15 percent of the total MTT entrants are paid, with the lion’s share of the prize pool reserved for the top three finishers. While it is possible to win a massive prize in relation to the buy-in, MTTs can last several hours and you will often go many tournaments without ever reaching the money, meaning you need a larger bankroll to play MTTs, something new poker players so not always have.

SNG are a great way to learn how to play poker as they start whenever the table is full and usually last between 30-45 minutes to finish. In a nine-handed SNG, the top three places are paid, with the winner taking 50 percent of the prize pool, the runner-up 30 percent and third-place banking 20 percent.

As SNG are very structured, and even have an early, middle and late stage to them, they are a great tool for learning the basics of poker, including how to play on the money bubble, how to play with different sized stacks, while giving you control over how long your poker sessions are because they usually take the same amount of time to complete. There are also some good SNG poker tools you can use to help you learn the game.

How to Build a Bankroll 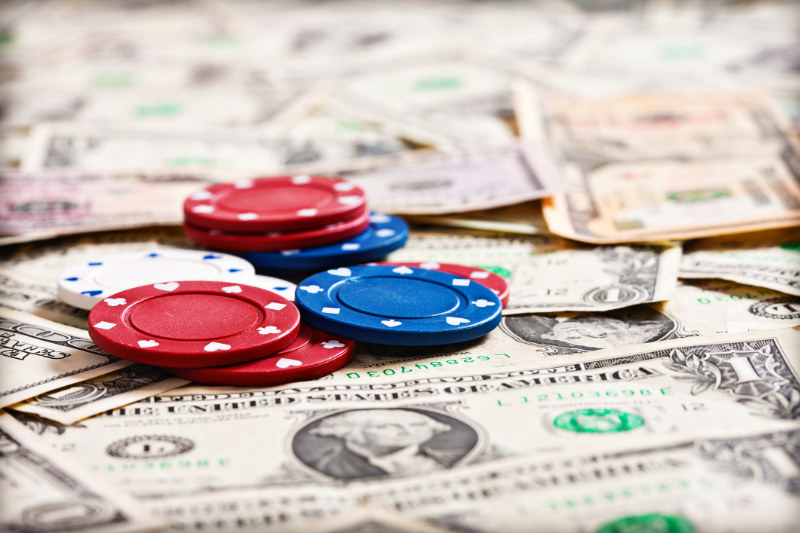 Building a bankroll is, on paper at least, easy. Win money and don’t spend that money on anything else other than having a bigger cushion of money to play from. It is as simple as that.

To ensure you have a low risk of going bust, you should play at stakes that your bankroll allows. The table below shows a rough guide to how many buy-ins you should have for the stakes you are playing in cash games, SNG and MTTs. You can use fewer buy-ins if you are able to replenish your bankroll, or use more buy-ins if you want to be more conservative.
You should only move up in stakes when you have the required bankroll to play those next highest stakes.

What to Look For in an Online Poker Room 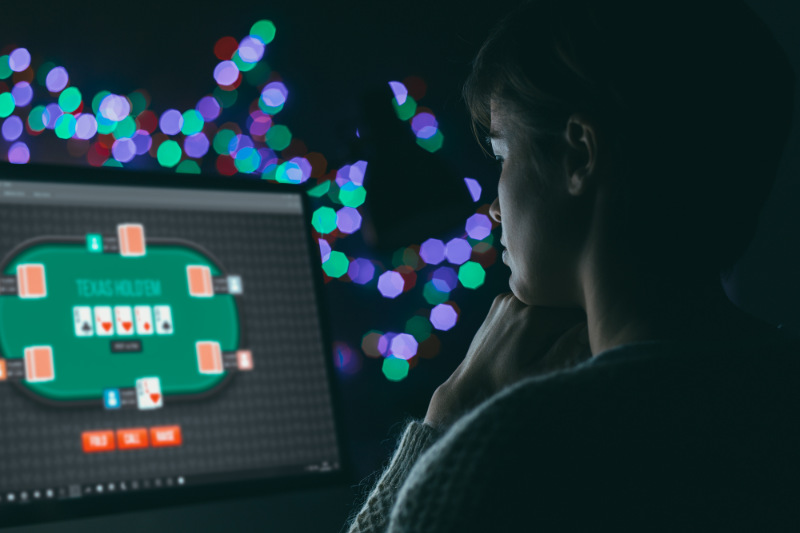 There are dozens of online poker rooms available today, but this wide range of choice can leave you feeling perplexed when it comes to choosing one to play at.

You should always play on an online poker site that has everything you need from it. If you are a cash game player then you want to play somewhere that has plenty of cash games running at the times you will likely be playing. The same goes for sit & go and multi-table tournament players; there’s no point joining a site that doesn’t have the games you want to play.

Read reviews of online poker sites and check for good customer service, whether they are licensed and regulated, what the bonuses and loyalty programs are and if there is any feedback from fellow players.

We could fill an entire page with tips for Texas Hold’em players, but these three tips should stand you in good stead if you are new to the tables.

2. Until you improve your hand reading skills and have mastered the game, a tight-aggressive style of play will likely yield the best results. Tight-aggressive means playing the stronger starting hands and playing them aggressively by betting and raising.

3. Never play when you are tired or under the influence of alcohol or medication. You need to have your wits about you if you are to be successful at poker because you can bet your bottom dollar many of your opponents will be playing against you fully focused.

Most Popular Forms of Online Poker

No-Limit Texas Hold’em is by far the most popular form of online poker today with the vast majority of cash games, sit & go tournaments and multi-table tournaments being No-Limit Hold’em.

Multi-table tournaments are extremely popular with cash games also being plentiful at almost every online poker site. Sit & Go tournament traffic varies greatly from site to site, with some online poker sites offering Jackpot Sit & Go’s where you can win massive prizes in a matter of minutes.

There are dozens of poker terms that you will hear when playing this amazing game. While you will probably never learn them all, these 10 poker terms are likely to come in handy when you first start playing poker.