Update: Feb 28, 2020 – Massachusetts is likely to legalize online poker. Part of the reason is revenue. For example, the state generated $1.035 billion in profit from the lottery in 2017. Last January, State Senator Bruce Tarr introduced bill SD. 618 to legalize online gaming in Massachusetts. Only licensed casinos could offer internet gambling under the bill. The U.S. Department of Interior approved a casino for the Mashpee Wampanoag Indian tribe. The casino is estimated to be built in 2022 in southeastern Massachusetts at a cost of $1 billion. 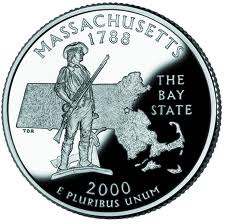 Massachusetts is pretty strict when it comes to their gambling laws. In the same vein, the penalties are pretty strict too. However, the local government is open to benefits that can come from online gaming. Additionally, they are aware of outdated laws.

“Tenth, “Gaming”, “illegal gaming” or “unlawful gaming” shall include every act punishable under any law relative to lotteries, policy lotteries or policy, the buying and selling of pools or registering of bets.”

“Whoever, on a prosecution commenced within eighteen months after the commission of the crime, is convicted of winning at one time or sitting, by gaming or betting on the sides or hands of those gaming, money or goods to the value of five dollars or more, and of receiving the same or security therefor, shall forfeit double the value of such money or goods.”

“Whoever, in a public conveyance or public place, or in a private place upon which he is trespassing, plays at cards, dice or any other game for money or other property, or bets on the sides or hands of those playing, shall forfeit not more than fifty dollars or be imprisoned for not more than three months; and whoever sets up or permits such a game shall be punished by a fine of not less than fifty nor more than one hundred dollars or by imprisonment for not less than three nor more than twelve months.”

Massachusetts wants to regulate online poker and reap the tax benefits. For instance, ever since February 2013, the Massachusetts legislature has continued to look at two types of bills that would open up online gambling in the state. The first bill focused on the sales of lottery tickets over the internet. The second bill includes online poker. In both bills, the Massachusetts Gaming Commission would oversee licensing.

Additionally, the bill also mentions licensing costs. For example, licenses cost $10 million upfront with additional monthly fees under the bill. However, these fees aren’t determined yet. Additionally, the state would only allow three online websites. The licenses are valid for ten years.

Massachusetts has an estimated debt of $129.6 billion. Therefore, online poker and gaming would give the state much-needed tax revenue.

In 1971, the legislation created the Massachusetts state lottery. After that, the first lottery in 1972 had seven people and a prize of$50,000. In 1973, the State Lottery Commission took over bingo. Subsequently, lottery regulation switched to the Charitable Gaming Division. Visit their website to learn more about the Massachusetts Lottery.

In November 2011, Massachusetts passed a Gaming Act to introduce casino gambling into the state. The Massachusetts Gaming Commission (MGC) will oversee the issuance of three licenses to casinos and one slots parlor. MGM got the first license on June 13, 2014 and Wynn received the second on September 16, 2014. Penn National Gaming got the slots-only parlor gaming license. Find all the latest casino information at www.boston.com casinos page.

Is Sports Betting Coming to Massachusetts?

Massachusetts is in a sports betting hot zone. The entire Northeast is riddled with sports teams and die-hard fans. Now Massachusetts could become the largest sports betting market in New England, which could help pave the way for online poker. According to the Boston Globe, state lawmakers advanced a bill that would allow sports betting. This comes two years after the bill was being debated.

Because of this, lawmakers are hoping sports betting will reach Massachusetts by the 2021 NFL season. While this is a big step forward for gaming in the state, there are still some roadblocks on the way to legalized online poker.

For example, some senators have concerns about expanding legalized gambling in the state. However, the rollout of sports betting could be a big boom for the state and help change their minds. After that, the state legislature could be more open to online poker. Similarly, if the state approves online poker, it would probably follow the blueprint set out by sports betting.

For example, the proposed sports betting law gives the local casinos the right to host the expanded gaming measures. After that, the big question would be if Massachusetts would join the shared player pool. The state has a huge population and could be really kick off the online poker market.