Western Union and MoneyGram, while not the most convenient, are the safest and perhaps best ways to deposit money into a US poker site. To use either of these methods, contact the poker site you’re looking to deposit at and ask them for details to send payment. The site will then provide you with a name and location to send money to. Once you have this, head to your local supermarket or Wal-Mart, fill out a form and submit this along with payment. The receipt you’re given will have a money control or transfer number. You’ll send this to the poker site, via email, and within an hour or two your account will be credited for the amount sent, and at most sites also for the fee you had to pay to send the cash transfer.

Recommendation: The only site I would recommend doing a MoneyGram or Western Union deposit at this time would be www.IgnitionPoker.eu (previously known as Bovada). 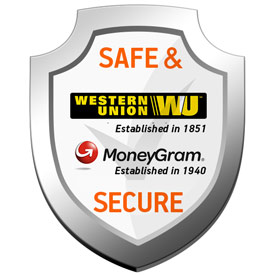 While this might sound like a lot more hassle than simply depositing with a credit card, there are several benefits to using Western Union or MoneyGram. The largest of these benefits is privacy. Credit card companies do not like processing gambling related transactions, nor do banks. In fact, in 1991 a court ruled that credit card transactions for gambling are unenforceable debts. This came when a man from Massachusetts named Richard Kommi was found not responsible for paying back a $5,500 cash advance he received on a casino floor because in the state he lived (Massachusetts), in the state he gambled (New Jersey), and in the state the credit card company was located (Connecticut), gambling debts are not enforceable. This was reaffirmed when MasterCard and Visa lost a suit based in California in 1998 against Cynthia H. Haines. Not only was she found not responsible for the $70,000 in debt she lost gambling on the internet, she also won a counter-suit.

These early cases set base for MasterCard and Visa wishing to stay as far away from gambling as possible. In 2006, a new law which applies to sports betting, was passed that made it illegal for banks and credit cards to process transactions related to “illegal” online gambling (note: not all gambling is illegal, see our page on poker law). While this law applies only to sports betting, with the high penalties for illegal transactions going through by accident. And the fact gambling debts were already unenforceable has caused most credit card companies to really up their blocks on all forms of gambling, legal or not, which is why legal and regulated state ran poker sites are still having credit card issues to this day.

Along the same tune, when this 2006 law finally went into effect in 2010, many banks started closing even long-term customers accounts, out of fear their transactions might relate to “illegal” gambling. Again, while we’re not lawyers, as far as we know there are no federal laws against online poker (only sports betting).

If you value your relationship with your bank or your credit card company, while it is a little more of a hassle, depositing via Western Union or MoneyGram is a good way to avoid risking that relationship.

Is it Safe to Use MoneyGram or Western Union for Poker in the US?

Western Union and MoneyGram are both US-based companies traded on the New York Stock exchange. Western Union has been in business since 1851 and as of 2015 has more than 500,000 Western Union agent locations, is in over 200 countries and territories, has over 150 million customers, with annual revenues exceeding $5.5 billion.

MoneyGram also has an impressive track record. Their company was founded by American Express which sold the business in 1998 to The Travelers Express Company, Inc., which has been in business since 1940. In 2015, MoneyGram revenues exceeded $1.4 billion located in over 200 countries and territories across their 350,000+ world wide locations. As far as the company is concerned, yes these transactions are safe.

The challenge comes in that both MoneyGram and Western Union forbid their employees and their agent’s employees from accepting any transactions that are identified as gambling related. While there is no risk to your funds, if asked and you truthfully answer you’re depositing to play US poker online, even if it’s legal in your state, the agent might refuse your transaction.

As I’ve already alluded to in this article, the risks of depositing via credit card are far greater than MoneyGram or Western Union deposits. Personally, as someone who values privacy, I prefer to make my deposits via one of these two cash transfer services rather than traditional means of deposit. The good news is that all major online poker sites accept one or both of these methods.

Our top suggestion for depositing online via MoneyGram or Western Unions is Ignition Poker, previously known as Bovada, which has some of the softest US friendly poker games you’ll find online.

Can Anyone Stop Kahle Burns? Aussie Books Yet Another Victory